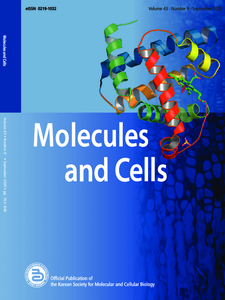 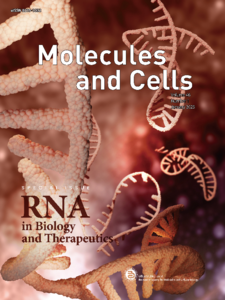 (A) SDS-PAGE analysis of full-length (1-287) and truncated (75-287 and 79-287) variants of CafA. Constructs used in this study are enclosed in a black box. (B) Elution profile of CafA obtained using a Superdex Increase 200 10/300 GL column. The molecular weight of CafA was estimated by comparison with gel filtration standards (black arrows) ferritin (440 kDa), aldolase (158 kDa), ovalbumin (43 kDa), and ribonuclease A (13.7 kDa).|@|~(^,^)~|@| (A) Thermal and (B) pH stability of purified CafA. CO2 hydration activities of purified CafA were obtained by measuring pH over time. Each point is the mean of three separate replicate experiments, and error bars represent SD. Maximum activities at 22°C and pH 7.0 were set as 100% in (A) and (B), respectively. (C) Inhibition of CafA with various concentrations of acetazolamide. CO2 hydration activity without acetazolamide was set at 100%. (D) Inhibition of CafA by anions.|@|~(^,^)~|@| (A) Cartoon representation of the CafA tetramer. Zinc ions are shown as green spheres. (B) CafA protomer structure. Subdomains within the protomer are indicated by black dashed circles.|@|~(^,^)~|@| Superimposition of one protomer of CafA onto one protomer of other β-CAs from (A) (ECCA, PDB ID 2ESF), (B) (CaNce103p, PDB ID 6GWU), (C) (HICA, PDB ID 2A8D), (D) (Can2, PDB ID 2W3Q), and (E) (CAS1, PDB ID 4O1J).|@|~(^,^)~|@| N-terminal residues (1-74) that were not included in the CafA construct are colored gray. Secondary structural features are shown above the sequence alignment; α-helices are indicated as cylinders and β-strands as arrows. Residues responsible for zinc ion coordination in CafA and CafB are highlighted in yellow.|@|~(^,^)~|@| Close-up view of the zinc coordination sphere. Residues and the zinc-bound acetate (ACT) are shown in stick representation, while zinc ions are shown as green spheres. The Fo-Fc map superimposed on the refined acetate is contoured at the 3 σ level.|@|~(^,^)~|@| (A) Cartoon representation of the acetazolamide-bound CafA tetramer. Zinc ions are shown as green spheres. The carbons, nitrogens, oxygens, and sulfurs of the acetazolamide (AZM) are colored cyan, blue, red, and yellow, respectively. (B) Active site of acetazolamide-bound CafA. The Fo-Fc map superimposed on the refined AZM map is contoured at the 2.3 σ level. (C) Schematic diagram of the CafA-AZM interactions. Residues engaging in hydrogen bonds and salt bridges with AZM are shown. The pH of the buffer and previous biochemical data suggest that the nitrogen atom of the sulfonamide moiety and the carboxyl group of D121 are likely to be deprotonated (Dollery, 1991). All distances are shown in angstroms. (D) Superimposition of the CafA active sites in the presence and absence of AZM. Structural changes in G179 and F160’ are marked by black arrows. The α5 helix is drawn as a coil for clarity.
Mol. Cells 2020;43:831~840 https://doi.org/10.14348/molcells.2020.0168
© Mol. Cells
© The Korean Society for Molecular and Cellular Biology. Powered by INFOrang Co., Ltd